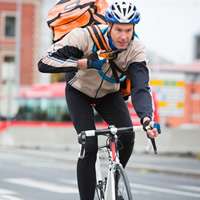 A cycle courier has won the right to paid holiday and a statutory minimum wage after launching legal action against his employer.

The Central London Employment Tribunal had ruled that the courier company Excel, now part of CitySprint, had wrongly classed Andrew Boxer as an independent contractor.

Judge Joanna Wade said that describing Mr Boxer as a contractor did not reflect “the reality” of the arrangements and that, given he was required to work five days a week and was paid a non-negotiable fixed rate, it was only right that he be considered a worker.

The case is one of several to have been brought against courier companies by employees who feel that they are wrongly being categorised as “self-employed” and are thus denied the basic rights enjoyed by workers.

The Independent Workers Union of Great Britain (IWGB) has been supporting a number of individuals in their respective employment battles.

Jason Moyer-Lee, the head of the IWGB, said: “These courier companies all operate in the same way…This judgment is yet further evidence of what we have known to be true all along. Courier companies are unlawfully depriving their workers of rights.”

The growing use of self-employed workers and questions about whether individuals are being properly categorised previously prompted the Prime Minister to order a review into working practices relating to the so-called gig economy.

The report is being prepared by Matthew Taylor, a former aide to Tony Blair, and is set to be published later this year.

For expert advice on defending against or pursuing a Tribunal claim, please contact the head of our Employment team Susan Bernstein or visit.