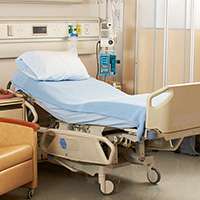 NHS bosses have agreed to pay an undisclosed sum to a family after a pensioner died having drunk a bottle of hand gel left by the side of his bed.

Pensioner John Haughey had been admitted to Hull Royal Infirmary in September 2015, suffering from the effects of a chest infection.

Evidently in a confused state, the 76-year-old had drunk the contents of the 535ml bottle of sanitiser – which was 75 per cent alcohol. He had died two days later.

A subsequent investigation was critical of the way that hospital staff had handled the incident; concerns were raised that medics had failed to record Mr Haughey’s breathing after he slipped into a coma.

Mr Haughey’s daughter, Diane Atkin, described the incident as “a disgrace from start to finish.”

“The top [of the bottle] was so easy to unscrew and so easily accessible that it was an accident waiting to happen,” she said.

“We were kept in the dark with very little information by the trust over what had happened to my father, how it had ever been allowed to happen and the failings in treatment after he had swallowed the gel.

“What hurt us more though was the fact that we were shown no respect and my father suffered from such poor care.”
Hull and East Yorkshire Hospitals NHS Trust admitted a breach of its duty of care. Following the tragedy, the trust has introduced lockable dispensers and issued staff with personal bottles of gel to prevent a similar incident occurring.

Mike Wright, the trust’s executive chief nurse, said: “We would like to offer our apologies and our sincere condolences to Mr Haughey’s family for their loss and for the distress they have experienced.”

It is important to seek expert legal advice if you believe you have the grounds to pursue a clinical negligence claim.  For guidance please contact our head of Dispute Resolution Stephen Silverman or visit our website.