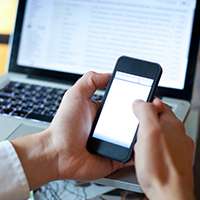 A survey from the polling firm, YouGov has found that most UK workers check their emails while on holiday.

Just 40 per cent of people questioned never check their emails while taking time away from the office, with a quarter of workers checking their inbox either ‘often’ or ‘very often’.

Despite this finding, 80 per cent of the workers who took part in the survey said that they would rather they had the opportunity to switch off completely which taking their holidays.

However, those who checked their emails ‘very often’ were split on this point, with half wishing to switch off and half content with staying in the loop at work.

Perhaps surprisingly, only five per cent of those questioned put their frequent email checking down to pressure from management.

Link: The majority of employees check work emails while on holiday