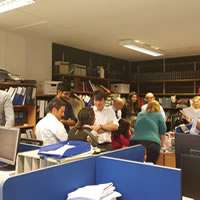 Staff at Finchley-based solicitors, OGR Stock Denton LLP, have raised more than £400 for Macmillan after holding a Coffee Morning and a series of fundraising events.

As part of the charity’s Coffee Morning initiative, Trainee Solicitor Lauren Gaines organised a day dedicated to fundraising for Macmillan through various activities including a ‘dress down day’, a bake sale and a ‘quirky quiz’.

Staff were encouraged to put their baking skills to the test to create a spread to be proud of. There was stiff competition for the star baker award, but after much deliberation it was decided that both Secretary, Geeta Lynch’s, carrot cake and Paralegal, Sonia Chadni’s, peanut butter brownies were deserved winners.

This was the third year running that staff at OGR Stock Denton have taken part in what is now the world biggest coffee morning.

OGR Stock Denton Managing Partner, Richard Denton said: “I’m delighted that we’ve been able to raise so much for Macmillan. Lauren and the team did a great job in organising and participating in these activities and, as Partners, we were very happy to be able to contribute.

“Here at OGR Stock Denton, we’re always looking to make a positive contribution, and what better way to do so than by raising funds for the vital work of Macmillan?”

To make a donation to Macmillan, please click here: https://donation.macmillan.org.uk/wbcm/payin#.VS5wUdzF9FU