Home » Inquiry will be held into contaminated blood scandal 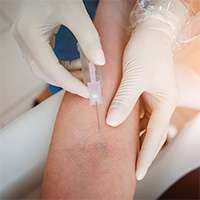 The Prime Minister has confirmed that a UK-wide inquiry will be held into NHS failings which have claimed more than 2,000 lives.

Earlier this month, Theresa May gave a commitment that all efforts would be made to get to the bottom of the contaminated blood scandal – which has been described as the most serious treatment crisis in the history of the health service.

In decades gone by, thousands of patients were given blood products from overseas which led to them being infected with HIV and Hepatitis C.

Many of those who were subsequently diagnosed – and the families of those who have since died – have said they were not informed of the risks and have alleged the authorities had tried to cover-up the scandal.

Speaking to the BBC, Mrs May said: “They deserve answers, and the inquiry that I have announced today will give them those answers, so they will know why this happened, how it happened. This was an appalling tragedy and it should never have happened.”

Families will now be consulted on the manner of inquiry to be carried out, but Labour leader Jeremy Corbyn has already made clear that it should have the potential to trigger prosecutions if major failings are uncovered.

Sir Peter Bottomley, the co-chairman of the cross-party parliamentary group on haemophilia and contaminated blood, said it was crucial that those who led the investigation had full access to relevant paperwork dating back to the 1970s and 80s.

“[The inquiry] must have powers to get documents from pharmaceutical companies and government,” he said.

It is important to seek expert legal advice if you believe you have the grounds to pursue a clinical negligence claim.  For guidance please contact our head of Dispute Resolution Stephen Silverman (ssilverman@ogrstockdenton.com) or visit our website.