Home » Should holiday entitlement for term-time only workers be subject to a pro-rata reduction? 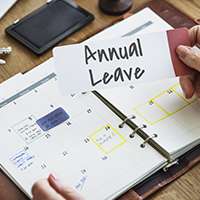 No, held the Court of Appeal in Harpur Trust v Brazel.

Workers in Great Britain, including part-time workers have a right to a minimum of 5.6 weeks’ paid annual leave under the Working Time Regulations 1998 (WTR).  How this applies to a worker with no normal working hours can be difficult to establish.  A common approach is to say that the worker accrues holiday entitlement at the rate of 12.07% of hours worked, based on the fact that the standard working year is 46.4 weeks (that is, 52 weeks less the statutory 5.6 weeks holiday entitlement) and 5.6 weeks is 12.07% of 46.4 weeks.

FACTS:  Mrs Brazel was a part-time music teacher engaged under a permanent zero-hours contract.  She worked variable hours, typically giving between 20 and 30 half-hour lessons a week.  The school year varied between 32 and 35 weeks. Mrs Brazel was therefore a part-time worker in two senses, firstly that she did not work a full working week and, secondly, that during the school holidays, she did not work at all.  It is the second type of part-time working with which this case is concerned.

Mrs Brazel’s contract stated that she was entitled to 5.6 weeks paid annual leave in line with the WTR and that she was required to take this during school holidays.  As the school holidays were far longer than 5.6 weeks, no particular weeks were designated as statutory holiday but by agreement the Trust made three annual payments in respect of holiday. Following Acas guidance, the Trust calculated Mrs Brazel’s earnings at the end of each term and paid her one third of 12.07% of that figure.

Mrs Brazel argued that this resulted in her being underpaid.  She argued that the ‘week’s pay’ calculation set out in section 224 of the Employment Rights Act 1996 (ERA) for workers without normal working hours, which would involve taking her average earnings over the 12 weeks immediately before holiday were taken, would result in holiday pay of around 17.5 % of her earnings for the term. She brought claims in the employment tribunal for unlawful deductions from wages for the difference as well as a claim asserting less favourable treatment on grounds of part-time status. The employment tribunal dismissed her claims.  It held that a principle of pro-rating should apply and that the statutory scheme should be read for part-time workers, who worked fewer than 46.4 weeks per year, so that payment was capped at 12.07% of annualised hours. Mrs Brazel appealed to the Employment Appeal Tribunal (EAT) in relation to the correct calculation of holiday pay only. The EAT upheld her appeal, finding that the tribunal had erred in capping her holiday pay at 12.07% of annual earnings. The EAT held that there was no requirement in the WTR to pro rate holiday for part-time employees to ensure that full-time employees were not treated less favourably and the tribunal should have applied the straightforward calculation prescribed by section 224 of the ERA.  The Trust appealed to the Court of Appeal.

HELD:  Lord Justice Underhill, giving the Court of Appeal’s judgement, noted that the issue was whether Mrs Brazel’s holiday entitlement should be reduced to reflect the fact that she was a ‘part-year’ worker, a phrase used by him to describe someone who did not work throughout the year.  He accepted that EU law requires only that workers accrue entitlement to paid annual leave in proportion to the time that they work but he concluded that it was not mandatory to adopt this approach and more particularly, there was no requirement in EU law to pro-rate the leave entitlement of part-year workers to that of full-year workers. He acknowledged  that at first sight not applying the pro-rata principle could lead to anomalous results if part-time workers worked a few weeks a year but still had 5.6 weeks’ holiday a year. However, he was not persuaded that this was unprincipled or obviously unfair.  It was important that Mrs Brazel was on a permanent contract and it was not unreasonable to treat that as a sufficient basis for fixing the amount of holiday entitlement, irrespective of the number of hours, days or weeks that she might have to perform under the contract; the actual days from which she would be relieved, and the amount of her holiday pay would reflect her actual working pattern. Given the wide spectrum of working arrangements, be it part-time, part-year or casual, there is an obvious attraction to having the same entitlement for all permanent employees.

Lord Justice Underhill accepted that this approach would lead to odd results in extreme cases such as the cricket coach or exam invigilator, whose services are required for only a few weeks a year.  However, general rules sometimes produce anomalies and it would be unusual for those who work for only a few weeks a year to be on a permanent contract as opposed to being engaged on a free-lance basis.

On a natural construction of the WTR, there is no provision for pro-rating and an employer should simply carry out a straightforward exercise of identifying a week’s pay in accordance with the provisions of section 224 of the ERA where there are no normal working hours and multiplying that figure by 5.6.

Comment:  Although Lord Justice Underhill made clear in this judgement that the ruling only applies to holiday entitlement and pay for those on permanent contracts, it could potentially lead the way for casual workers not employed on a permanent contract to argue that their holiday pay should also not be subject to the 12.07% cap. It should also be noted that Lord Justice Underhill emphasised that the case was about ‘part-year’ workers and not part-time workers, who work part of a week, and so the conclusions are inapplicable to part-time but full-year workers.  Where there are part-year workers on a permanent contract, be it in respect of anything from offshore oil rigs to education, the approach in this case should be followed.