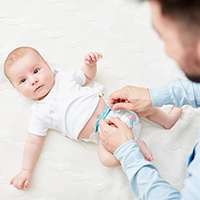 The Employment Appeal Tribunal (EAT) has recently had the opportunity to consider this question in two recent cases.

The right to shared parental leave (SPL), under which a woman who is entitled to statutory maternity leave (SML) and statutory maternity pay (SMP) can choose to bring her leave to an end early and share the balance with the father, was introduced in April 2015.  The rate of statutory shared parental pay (SPP) is low (a maximum of £145.18 per week) being the same rate as SMP. Many employers enhance SMP and this has led some male employees to ask for their SPP to be enhanced also.

In Capita v Ali, the EAT held that failing to give a male employee enhanced shared parental leave pay in line with enhanced maternity pay is NOT direct sex discrimination – that is discrimination where a person (A) treats another (B) less favourably, because of their sex, than A treats or would treat others.

When Mr Ali’s daughter was born in February 2016, he took two weeks’ paid leave. However, his wife was diagnosed with postnatal depression and was advised to return to work so Mr Ali wished to take further leave to look after his daughter. When he asked Capita about his rights, he was told that he was eligible for shared parental leave but would only be paid statutory shared parental pay. Mr Ali asserted that he should receive the same entitlements as a transferring Telefonica female employee taking maternity leave.

When his formal grievance to this effect was rejected, he issued proceedings in the employment tribunal alleging direct and indirect sex discrimination.  The employment tribunal held that Mr Ali had been directly discriminated against on the ground of his sex – the tribunal could not see why any preferential treatment should be given to a woman taking leave to care for her child after the end of the two week compulsory maternity leave period.  The tribunal observed that men are now being encouraged to take a greater role in caring for their babies and that the choice of which parent should take on the greater burden of caring responsibility should be made free of assumptions that the mother is always best placed to do so. Capita appealed.

Comment: Although this decision appears to shut down the prospect of men on SPL seeking equal treatment with women on SML, the EAT did not entirely rule out such a claim.  The work-life balance charity, Working Families, which intervened in the appeal, submitted that the difference in circumstances between a man seeking SPL and a woman on maternity leave may not continue throughout the entire period of maternity leave.  The EAT acknowledged that after 26 weeks, the purpose of maternity leave may change from the biological recovery from childbirth and special bonding period between mother and child to caring for the child as a parent. At that point, it may be possible to draw a valid comparison between a father on SPL and a mother on maternity leave because in both cases the purpose of the leave would be to care for the child. The EAT left open the possibility of a claim based on such facts being successful but we will have to wait for such a case to be brought.

In the case of  Hextall v Chief Constable of Leicestershire Police, the EAT had to consider whether a failure to give  a male employee SPL on full pay was indirect discrimination – that is discrimination where a person (A) applies to another (B) a provision, criterion or practice which is discriminatory in relation to a relevant characteristic of B’s (in this case, B’s sex); it puts B, and persons with whom B shares the characteristic, at a particular disadvantage; and A cannot show it to be a proportionate means of achieving a legitimate aim.

Held: Unfortunately, the judgement of the EAT is a bit of a damp squib in that it held that the employment tribunal had made a number of errors in its analysis and so remitted the case to a new employment tribunal for a fresh hearing to reconsider and to decide whether the practice, if found to be discriminatory, can be justified.

Comment: The EAT’s judgement did not tackle the question at stake and gave no indication whether the claim is likely to succeed. At the moment, employers who enhance SMP for mothers but pay only statutory SPP to fathers may continue to do so.  However, the Women and Equalities Committee of the House of Commons earlier this year called on the Government to improve fathers’ rights at work to enable them to play a greater role in childcare. There is no doubt that the low level of statutory SPP is a barrier to the uptake of shared parental leave and the Government is due to review the SPL regime later this year. Following the decision in Capita v Ali, it seems that the impetus for change will have to come from the Government rather than the courts.