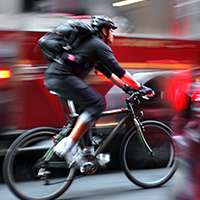 A cyclist who was involved in a collision with a pedestrian who was crossing the road while looking at her phone in an incident a judge ruled they were equally to blame for, but where he was responsible for the legal costs of both parties, has settled for £30,000.

The cyclist, Robert Hazeldean, and the pedestrian, Gemma Brushett, were both left unconscious following the July 2015 collision.

While Brushett sought compensation from Hazeldean, who had no insurance in place, he did not counter-claim, meaning he was deemed responsible for the legal costs of both parties on top of damages of £4,300 to be paid to Brushett.

Under the qualified one-way cost shifting system that was introduced in 2013, people involved in an accident who do not counter-claim can be liable for their own and the other party’s legal costs.

The lawyers acting for Brushett initially claimed costs totalling £112,000, but have now settled with Hazeldean for £30,000.

In addition to covering Brushett’s lawyers’ costs and her £4,300 compensation, Hazeldean also had to cover his own legal fees of £25,000.

Following the initial ruling, a GoFundMe appeal was set up by friends of Hazeldean, which ultimately raised more than £59,000 towards his costs. After costs, interests, damages and GoFundMe’s fees were taken into account, Hazeldean was left £2,979 out of pocket.

Speaking to The Guardian, Hazeldean said: “It’s not the result I was hoping for, but everything was spiralling and the risk of being bankrupted regardless of the outcome was too high. I felt I didn’t really have a choice.”