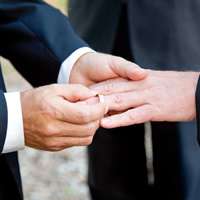 New figures from the Office for National Statistics (ONS) have revealed that the number of new civil partnerships formed last year was 49 per cent down on the previous year as same-sex couples opt for marriage instead.

In 2015, 861 new partnerships were made, compared to a significantly higher 1,683 in 2014. This came after The Marriage (Same Sex Couples) Act legalising same-sex marriage in England and Wales came into force in March 2014.

The overall rate at which new civil partnerships are formed has now fallen by 85 per cent since 2013.

Around 48 per cent of the new partnerships formed last year were made between older couples aged 50 or over, this compares to just 20 per cent before the introduction of same-sex marriage.

Around 66 per cent of civil partnerships in 2015 were between men – the highest proportion since the partnerships were introduced in 2005.

However, the equivalent of divorce for civil partnerships, known as dissolution, has also increased by 14 per cent over the previous year to 1,211 during 2015.

Elizabeth McLaren of the ONS said: “Dissolutions are likely to reduce in the future as more same-sex couples form marriages instead of civil partnerships.”