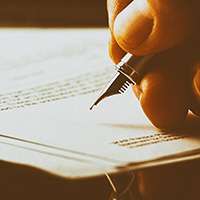 A man who lost his partner to cancer two years ago is embroiled in a dispute with a group of charities over her £340,000 estate.

Tracey Leaning, who passed away in 2015, had wanted to leave her home to her partner Richard Guest.

A year before her death, Ms Leaning had prepared the handwritten document, witnessed by two neighbours, stipulating that he should have the house, providing he looked after her three dogs.

However, it emerged that a previous Will – written a decade ago – left the property, savings and other assets to four charities.

The organisations (Dogs Trust, World Animal Protection, Friends of the Animals and Heart Research UK) have now claimed the later document is invalid.

Mr Guest said:  “It’s ironic that three animal charities are pushing this case when all I want to do is fulfil Tracey’s heartfelt desire that the dogs stay together in a familiar place.

“They are trying to say the second Will is invalid because the paper with the signature on it wasn’t stapled to the other part, but it was in the same sealed envelope and was only opened by her solicitor.”

In a joint statement, the beneficiaries of the early Will said:  “Charities are extremely grateful to receive gifts from Wills as they enable them to make a real difference to people and animals. If it is not possible to reach agreement about this, then the parties will need to ask the court to decide.”

For advice on making or updating a Will – and reducing the likelihood of a challenge being made at a later date – please contact our Senior Associate Geoff Dennis or visit our website.