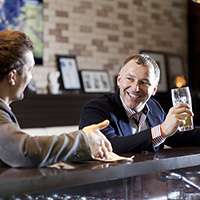 A businessman has won a High Court battle which centred around a £15million deal which he had allegedly struck in a London pub.

Mike Ashley, the owner of Sports Direct and Newcastle United FC, had found himself embroiled in a dispute following a night of heavy drinking at the Horse and Groom, not far from Oxford Street.

Investment banker Jeffrey Blue had claimed that during the course of the evening, Mr Ashley had agreed to pay him a £15million sum in the event that Sports Direct’s shares doubled.

During the course of court proceedings, the businessman had said he had no recollection of making the comment and suggested it had been “banter”.

Mr Justice Legatt last month ruled that no-one would have considered the offer to be serious.

“The Sports Direct senior management meetings certainly show that Mr Ashley is happy to combine discussion of business matters with the consumption of alcohol,” said the Judge.

“But there is no evidence to suggest that Mr Ashley has ever negotiated or concluded a contract at one of these meetings.

“The evening at the Horse and Groom was, in any event, a considerably less formal occasion than the senior management meetings, as there was no agenda or structure for the occasion and the conversation was largely social or general chat, rather than being specifically directed to any business subject.”

At OGR Stock Denton we can offer advice on a full range of commercial disputes.  For guidance please contact our head of Dispute Resolution Stephen Silverman (ssilverman@ogrstockdenton.com) or visit our website.