Home » Are tattoos and piercings at odds with your company’s image? 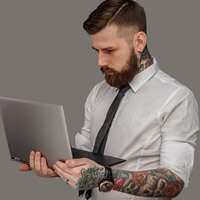 About one in five British people are thought to have a tattoo, and they are most popular among 30 to 39-year-olds, with more than a third admitting to being inked, according to one survey.

As for piercings, one in ten people in the UK are thought to have a piercing somewhere other than their earlobe. The practice is extremely popular among women aged 16 to 24, as almost a half are alleged to have a non-earlobe piercing, or so one study says.

Some organisations may feel that tattoos and piercings are at odds with the ethos or image they are trying to project. However, if they take a negative attitude to tattoos and piercings during the recruitment process they might as a result lose out on young talent and perhaps they should review whether it is necessary to have a dress code asking workers to remove piercings and to cover up tattoos.

Acas has issued new guidance urging employers to ‘carefully consider’ the reason behind imposing a rule – as there should be ‘sound business reasons’ for it.

This could, for example, be a valid health and safety reason, such as keeping dangling piercings away from factory machinery.

Employers should also remember that dress codes must apply to men and women equally, although they may have different requirements and they must avoid unlawful discrimination.

Acas recommends consulting employees over proposed dress codes. Once an agreement has been reached, it should be written down in a formal policy and communicated to all staff so they understand what standards are expected from them.