Home » Is romance in the air in your office? 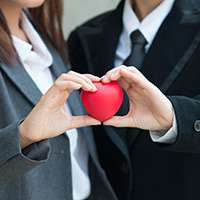 I  am  a  partner  in  a  medium-sized  firm  of  accountants.  I have been very focused on my work for many years, spending long hours at the office. Without wishing to be smug, I am pleased with how my commitment to the firm has paid off. However, I now find I can’t help being distracted by my rather attractive trainee. At weekends, I am looking more and more forward to Mondays so I can see her again. I am pleased to say that I am confident that my feelings are reciprocated but before I ask her out, I know I should remind myself of the legal issues of a workplace romance.  The trouble is, I am so in love, I can’t see the wood from the trees.  Surely, there isn’t any risk in adding a bit of excitement to my work life. Or is there?

These days, many of us are at work almost as much as we are at home so it is easy to see why you might be tempted to start an office romance with someone you spend so much time with – someone whom you have already got to know well on a day-to-day basis and who understands the pressures of your job. It can be exciting “pretending” to your colleagues that you are not dating and it could mean that you are able to work well together. However, there are also a lot of ‘cons’ to workplace relationships:

As well as the general definition of harassment, there is an additional definition in the Equality Act which deals specifically with sexual (as distinct from sex-related) harassment. Although this definition overlaps to a large extent with the general definition, conduct of a sexual nature can cover such things as unwelcome sexual advances, touching or forms of sexual assault. In the context of an existing relationship, a tribunal may be required to consider the point at which the conduct between the parties goes from consensual to unwanted.  In A v Chief Constable of West Midlands Police A complained that she had been subjected to sexual harassment by B, her supervisor for eighteen months. However, the employment tribunal found that the relationship had been consensual for the most part and only turned sour at the very end, with sexual harassment occurring over two days only when B had pestered A because he intended to abandon his girlfriend and sought to propose marriage to A, making constant attempts to contact, persuade and plead with her.