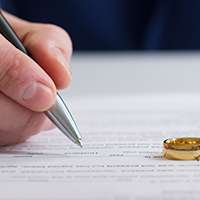 The Supreme Court has ruled this month in two separate high profile divorce cases – both of which ultimately related to the possibility of making a clean break from a former spouse.

Mills v Mills concerned the level at which maintenance payments should be made following divorce.

On this basis, she applied to the court to have the level of the annual payments increased but this was refused.

However, Mrs Mills then successfully applied to the Court of Appeal to overturn the decision, prompting Mr Mills to appeal to the Supreme Court.

The Supreme Court ruled that the judge in the first hearing had not erred and the Court of Appeal had been wrong to overturn the decision.

Meanwhile, Owens v Owens saw the Supreme Court rule on the definition of ‘unreasonable behaviour’ in a case where a wife’s petition for divorce had been successfully contested through the lower courts by the husband.

Tini Owens married Hugh Owens in 1978 but petitioned for divorce in 2015 after leaving the marital home. However, the petition has been contested by Mr Owens, an 80-year-old former businessman, who denies allegations of unreasonable behaviour.

Her petition was refused by a family court judge in 2016 and by three appeal court judges in 2017. Both courts found that Mrs Owens had failed to demonstrate that the marriage had broken down irretrievably.

This was upheld by the Supreme Court in its decision, meaning that Mrs Owens will likely need to wait until the couple has been living apart for at least five years before petitioning for divorce again.

The Times published a letter to the editor from OGR Stock Denton LLP Family Partner, Graeme Fraser on the implications of the Owens v Owens case, which can be read here.

OGR Stock Denton has a wealth of experience advising on family law matters, including Divorce. If you would like further information about our services, please contact Peter Martin or Graeme Fraser or visit our website.