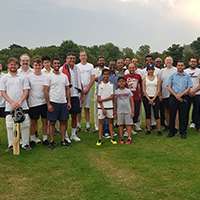 The OGR Stock Denton team won the match at Southgate’s Walker Ground by three wickets, chasing a score of 103 after some sharp fielding and bowling. After a quick four wickets at the start of OGR’s chase, the OGR team ended up as comfortable winners, avenging their defeat from last year.

The series between the two firms is now tied at one match each.

Michael Stock, Partner and Head of Property at OGR Stock Denton, said: “It was great to come out on top this year, avenging last year’s defeat!

“It is always good work with our colleagues at Gerald Edelman. Ultimately, our clients benefit from the close working relationship between our two firms.

“We are now looking forward to another match next summer.”