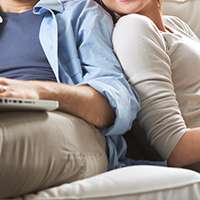 According to the latest statistics from the Office for National Statistics (ONS), cohabiting couples are the fastest growing family type in the UK.

The research found that the number of cohabiting couple families is growing faster than married-couple families, up 25.8 per cent over the ten-year period from 2008 to 2018.

During that time the overall number of families in the UK increased by 8 per cent between 2008 and 2018, from 17.7 million to 19.1 million, alongside a significant change in the way that people are choosing to live.

The research suggests that the traditional household of a married couple with children is giving way to cohabiting couples and people living on their own.

Over two-thirds of families are married with children. However, their percentage has shown signs of decline, dropping from 69.1 per cent in 2008 to 67.1 per cent in 2018.

Meanwhile, the proportion of cohabiting couple families, the second largest family type, has increased from 15.3 per cent to 17.9 cent, which works out at 3.4 million families. The number of lone-parent families stands at 2.9 million (15% of the total), giving them the third largest share.

There was a significant rise in the number of people living alone during this period, with the figure exceeding 8 million for the first time, and the number of same-sex couple families had grown by more than 50 per cent since 2015.

Sophie Sanders, of the population statistics division at the ONS, said: “The number of families and households in the UK has continued to rise in line with the growth of the UK population over the past decade. However, the ways that people live have been changing.

“While married couple families remain the most common, cohabiting couples are the fastest-growing family type as people increasingly choose to live together before or without getting married.”