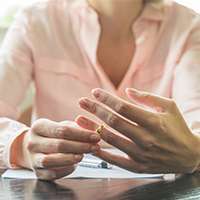 Justice Secretary, David Gauke, has told The Times that he will legislate to introduce an option for no-fault divorce in the next Parliamentary session.

At the moment, couples can only seek an immediate divorce for reasons that apportion blame for the breakdown of the relationship. Otherwise, the couple must be separated for either two or five years, depending on whether the other partner agrees to the divorce.

The Government consulted on the change in autumn 2018 and received responses indicating widespread support for no-fault divorce.

Family lawyers, including OGR Stock Denton LLP partner, Graeme Fraser, have been campaigning for years for a no-fault divorce option to be introduced.

The case of Tini Owens, whose husband successfully contested her divorce petition, further catalysed the campaign last year. She appealed to the Supreme Court, which ruled that as the law stands she could not divorce until five years separation has elapsed.

Further details of the new no-fault divorce process are expected to be published later in the year.