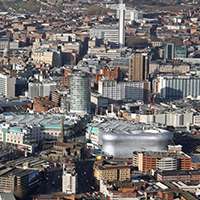 Figures published by think tank, the Centre for Cities, show that more and more people are choosing to live in the middle of the UK’s biggest cities.

In stark contrast to 30 years ago, when there was a sharp decline in city centre living, residential property in the UK’s biggest city centres is currently enjoying an upward swing in demand.

Central London has gained nearly 60,000 additional residents since 2002, a percentage increase of 22 per cent.

Meanwhile, the largest cities in the regions have seen their central populations balloon. Liverpool’s city centre population has grown by 181 per cent, while Birmingham city centre saw its population grow by 163 per cent.

The think tanks says that younger people are the key demographic behind this trend with universities and jobs drawing them into town.

The research shows that city centre residents are more likely to hold a degree than the suburban population and more than half of young residents work in highly-skilled professions, such as finance or law.

The trend puts pressure on developers to finely balance the demand for residential and commercial schemes in order to optimise returns on their investments.

If you need guidance with any aspect of property transactions, please contact the head of the Property team Michael Stock or visit our website.