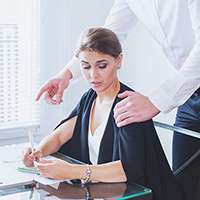 The Government’s Minister for Women, Victoria Atkins, has been speaking about the forthcoming Domestic Abuse Bill.

Taking on the role in 2015, along with that of Under Secretary of State for Vulnerability, Safeguarding and Countering Extremism, Ms Atkins has been instrumental in the development of the proposed Domestic Abuse Bill.

Announced earlier this year, the Bill is currently in a three month consultation period, which is set to close at the end of May. Its inception comes at a time when data from the Office for National Statistics (ONS) has revealed that 1.2 million women were affected by domestic abuse of some form in 2017. It is also estimated that a quarter of all women will suffer some form of domestic abuse during their lifetime.

The Bill aims to readdress this. Amber Rudd, who was Home Secretary at the time the consultation was launched, said that the new law would “fundamentally change the way we as a country think about domestic abuse”.

The proposals for tackling domestic abuse include:

Ms Atkins has spoken about prevention being the key, despite the cuts in policing numbers, saying: “I think in a way if we’re involving the police we’ve got a lot further down the line than I would like. I would like for us to be preventing and intervening on domestic abuse almost before the police have to become involved.

She added: “I’ve been really impressed by the enthusiasm and willingness of police officers I’ve met to improve the response that the police give when victims do find the wherewithal to pursue a complaint. Officers are much more aware now of the terrible role that domestic abuse can play not just in the abusive relationship itself but the wider consequences.”

Speaking on the future of the Bill, the Minister for Women said: “We’ve included it in the Queen’s Speech … There will be many, many debates ahead as to the shape of the Bill and the legislative measures and I look forward to that but this is a clear intent on the part of the Government.”

She concluded: “I do truly think that if we can get a Bill through the House, along with the non-legislative measures that we’re working so hard on, I do really believe that will be game-changing, and we’ll be protecting potential victims of domestic abuse in the years to come.”