Home » When may an employer suspend an employee without breaching the implied term of trust and confidence? 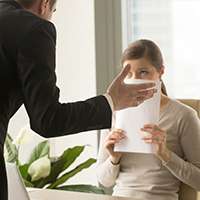 When it has reasonable and proper cause for doing so, held the Court of Appeal in London Borough of Lambeth v Agoreyo.

FACTS: Ms Agoreyo, an experienced primary school teacher, taught a class of 29 five and six year old children, two of whom exhibited extremely challenging behaviour. Allegations were made against Ms Agoreyo that she had used unreasonable force against these children on three occasions. It was claimed that she had “dragged” a child out of the classroom or along a corridor and that she had carried a child out of the classroom. Two of these instances had been investigated by the headteacher soon afterwards, who found that Ms Agoreyo had used reasonable force but after the third incident, she was suspended and resigned almost immediately.  She then brought a claim for breach of contract in the county court against her local borough, asserting that her suspension was a fundamental breach of the implied duty of trust and confidence.  The county court held that the school had reasonable and proper cause for suspending her.  It had an overriding duty to protect the children pending a full investigation of the allegations. That, in the county court’s view, could only be achieved by suspending Ms Agoreyo until the allegations were fully investigated.  Ms Agoreyo appealed to the High Court which allowed the appeal on the ground that Ms Agoreyo’s suspension was a ‘knee-jerk’ reaction to the ‘strident’ way in which the complaint against Ms Agoreyo by a teaching assistant had been phrased and that therefore the suspension was a breach of trust and confidence.    The Borough then appealed to the Court of Appeal.

HELD: The Court of Appeal agreed with the county court and held there was no breach of trusts and confidence by the school. The correct legal test was whether the headteacher had reasonable and proper cause to suspend. This is a highly fact specific question, not a question of law and the county court judge was entitled to hold on the facts of this case that it did have reasonable and proper cause to suspend Ms Agoreyo.

Comment: Suspension is a serious step. Rather than it being a knee – jerk reaction to an allegation of serious misconduct, thought needs to be given by the employer, prior to suspending, as to whether it is satisfied that it has reasonable grounds for the suspension so as to avoid breaching the implied term of mutual trust and confidence. Suspension  may be appropriate where, for example, there is a potential threat to the business or other employees, or where it is not possible to properly investigate the allegation if an employee remains at work (for example because they may destroy evidence or attempt to influence witnesses).