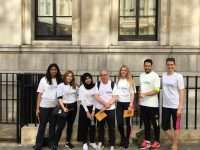 Lawyers from one of North London’s leading law firms have put their best feet forward by taking part in a walk through the heart of London with thousands of other legal professionals.

Seven members of the team from Finchley-based OGR Stock Denton LLP took part in the London Legal Walk on Monday 22 May 2017 to raise funds for the London Legal Support Trust, which provide free legal advice to people in need across London and the South East.

Partners Priti Shah and Peter Martin, were joined by associates Ben Menahem and Isabelle Fatton, as well as paralegals Imana Rashid and Ellaha Yusufzai and trainee solicitor Lauren Gaines, as they tackled the 10km course through central London.

In total, the seven members of the OGR Stock Denton team raised £600 for the London Legal Support Trust.

Peter Martin said: “This was a fantastic event and it was wonderful that so many from the London legal community turned out to raise funds for a very important cause.

“I am delighted that we were able to raise such a good sum and I know this will really benefit people in need across London and the South East.

“I’d like to thank all the members of the OGR Stock Denton LLP team for their efforts.”

The team raised a total of £300 from sponsorship, which was matched by the partners of the firm to reach a total of £600.