Home » A Lasting Power of Attorney should not be taken lightly 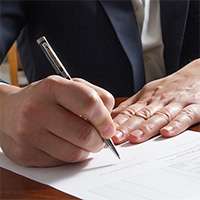 Britons who may be interested in setting up a Lasting Power of Attorney (LPA) are being advised to tread carefully and seek specialist advice from a solicitor, as hasty or ill-advised decisions can have a “devastating” impact on family relationships.

Retiree Denzil Lush, who worked for 20 years as a Senior Judge in the Court of Protection, has recently warned that many people are not aware of the risks involved in allowing another person to take control of their financial decisions when they themselves are no longer able to do so.

While an LPA can prove beneficial for a number of reasons, particularly when a person loses mental capacity as a result of a condition such as dementia, the recent case of Frank Willett, a Dunkirk and Normandy war veteran who was exploited by his neighbour, highlights why specialist advice should be sought to avoid making a regretful errors when setting up an LPA.

The elderly Mr Willett, his daughter Lesley Willett and her husband found themselves locked in a long-running legal battle after the war veteran – who was living with dementia – made his untrustworthy neighbour Colin Blake his attorney in 2003.

Mr Blake went behind the family’s back and withdrew large sums of money from the elderly man’s bank account.

Due to the fact that Mr Blake had power of attorney, the bank did not contact either Mr Willett or his daughter when these transactions took place, and the family did not uncover the deception until much later.

According to BBC News, Lesley Willett challenged the power of attorney in Court, but experienced great difficulty trying to prove that Mr Blake was ‘unfit’ to be her father’s attorney.

It was not until early 2008 that Ms Willett was able to revoke the power of attorney – at which point it was revealed that practically all of Mr Willet’s lifelong savings had disappeared.

Since that time, much stricter rules have been enforced regarding powers of attorney and a modern LPA can only be set up if a professional who has known the subject of the order well for many years is able to provide a certificate for the document to be drafted.

The Office of the Public Guardian (OPG) – which has been set up in more recent years – has also been granted greater powers to investigate complaints.

Nevertheless, the experience – which Ms Willett describes as “devastating” – highlights the importance of taking very careful measures before setting up an LPA or any other legal document.

An LPA should always be a well-rehearsed, family decision made under the guidance and supervision of an experienced, specialist solicitor able to give appropriate advice in relation to your unique circumstances.