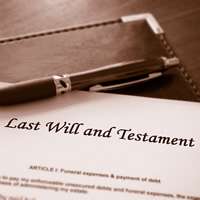 A Judge has ruled that a Will which a woman claimed left the lion’s share of her late husband’s £600,000 fortune was an obvious forgery.

Marsha Henderson had married Newton Davies, who was several decades her senior, back in 2004.

When he died nine years later, aged 85, he had left the bulk of his estate to his daughter, Paulette Davies, and the sum of £25,000 to Ms Henderson.

Two years ago, his wife had challenged the division of the estate, arguing that new instructions, scrawled on a piece of A4 paper, had been discovered.

She claimed the document had been kept inside an old crisp packet in the attic of Mr Davies’ home in Wembley, North West London.

But Judge Nigel Gerald described the story as “ridiculous”, noting the document was strewn with errors. One particularly startling mistake was that the paperwork referred to it being “her” last Will, rather than “his”.

Sitting at the Mayor’s and City of London Court, Judge Gerald declared the second Will invalid.

“The deceased was a man and not a woman. In the circumstances of this case I do not regard this as a trifling or inconsequential defect,” he said.

“It will obviously strike anybody as being somewhat eccentric to put an important document such as a Will into a Doritos bag, but there are eccentric people in this world.

“So that, of itself, does not cause me to be disbelieving, although it does cause me to consider how a man in his early 80s, who according to a friend does not eat Doritos, would put this document into an empty Doritos bag and then put it in the loft.

Ms Henderson could now face further legal proceedings from Mr Davies’ daughter for around £42,000 in rent.

Will disputes are often complicated and acrimonious affairs. For expert advice please contact Dispute Resolution Partner Ian Pearl or visit. For guidance on drafting a Will please contact Richard Denton or visit.