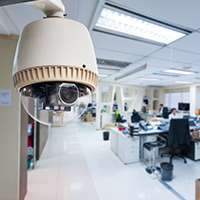 Balancing the conflicting demands of a community with the protection of an individual’s fundamental rights has given rise to a host a number of cases involving monitoring in the workplace. In this case, Lopez Ribalda and others v Spain, the Grand Chamber of the European Court of Human Rights (ECtHR) decided that the employees Article 8 rights were not violated.

Ms López Ribalda together with  four other applicants worked as cashiers at a supermarket chain MSA.  In June 2009, the manager of the supermarket discovered significant stock discrepancies. In order to investigate this, they installed CCTV cameras in the supermarket. The cameras aimed at identifying possible thefts by customers were visible. However, other cameras, aimed at recording possible thefts by employees at the cash desks, were not visible. Signs were put up in the supermarket to indicate that CCTV was in use but employees were not specifically told about the cameras.

Shortly afterwards, Ms López Ribalda and her colleagues were caught on video stealing items or helping co-workers and customers to steal items. Five employees admitted involvement in the thefts and were dismissed. All five of the employees brought unfair dismissal claims, arguing that the surveillance had been unlawful. The claims were dismissed by the Spanish employment tribunals and again on appeal by the High Court of Catalonia.

In their claims against Spain before the European Court of Human Rights  the employees complained that the use of footage taken from the covert video surveillance in the unfair dismissal proceedings had breached their right to privacy under Article 8 of the ECHR and the use of the footage in their unfair dismissal proceedings had infringed their rights under Article 6 of the ECHR, the right to a fair trial.

The ECtHR decided that the Spanish courts had failed to strike a fair balance between the rights involved. It held that the covert video surveillance in this case was targeted not at particular individuals but at all the staff working on the supermarket’s cash register, over a period of weeks, without any time limit and during all working hours. The decision to install covert surveillance had been based on a general suspicion against all staff in view of the stock irregularities.

Spain applied for the case to be referred to the Grand Chamber of the ECtHR for a re-hearing.

The ECtHR, sitting as a Grand Chamber, held that there had been no infringement of the Article 8 right to privacy (overturning the chamber decision).  In reaching its decision that the CCTV monitoring  in this case was necessary and proportionate, the court took into account the following factors:

It agreed with the chamber decision that there had been no infringement of the Article 6 right to a fair hearing.

The case follows what many employers will welcome as a common-sense approach to the use of covert monitoring as part of a targeted investigation, where the covert nature of the surveillance is an essential part of it. However, it is by no means a green light to blanket surveillance. In the UK, guidance published by the Information Commissioner’s Office states that it will be rare for covert monitoring of employees to be justified and that it should only be done in exceptional circumstances, for example, as part of a specific investigation into suspected criminal activity. It is therefore advisable for employers to maintain a strict policy that covert video surveillance will only be carried out in exceptional circumstances where the employer reasonably believes that there is no other less intrusive way of dealing with the issue. Where covert monitoring is undertaken, it should be done for the shortest possible period and affect as few individuals as possible.