Home » The importance of Wills for cohabiting couples 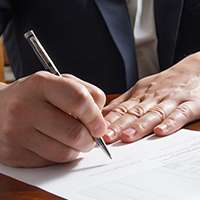 Cohabiting couples are being urged to consider the importance of Wills as part of Cohabitation Awareness Week.

The calls come amid concerns that unmarried cohabiting couples are now the fastest-growing family type in the UK, yet, contrary to popular belief, such individuals do not have any legal rights in the event of a separation or the unexpected death of one party.

Many mistakenly believe that cohabitees in England and Wales automatically acquire legal rights after they have been living together for a certain period of time. However, in reality, there is no such thing as ‘common law marriage’ in the UK. This can pose a particular problem in the event of the death of one partner, as the remaining partner would have a limited claim to their estate.

Up-to-date figures from the Office for National Statistics (ONS) suggest that there are currently approximately 3.3 million cohabiting couples living in the UK – many of whom could be unaware of their lack of legal rights.

In fact, a recent survey carried out by family law foundation Resolution, the group behind Cohabitation Awareness Week, found that two thirds of cohabiting couples wrongly believe that they are protected by ‘common law marriage’.

Nigel Shepherd, Chairman of Resolution, is calling on the Government for legislative changes.

“The Government must listen to the public, legal professionals and a growing number of politicians who all agree that we need reform to provide basic rights for cohabiting couples,” he said.

For the time being, cohabitees are advised to seek specialist legal advice and ensure that they have legally-recognised Wills in place clearly detailing their wishes in the event of their death.