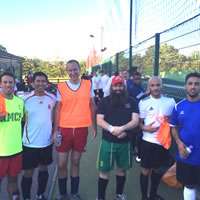 A team from OGR Stock Denton LLP is celebrating after scoring a total of 13 goals in a charity five-a-side football tournament with property solicitor, Ben Menahem leading the charge as the firm’s top goal scorer.

The tournament was hosted by Brasier Freeth in aid of Small Steps, a charity that helps children with disabilities and their families.

The OGR Stock Denton LLP team won three of their four matches on the day, winning 2-1 against Lambert Smith, losing 4-2 against Rayner Essex and winning 3-2 against the favourites, Aitchison Rafferty, who had won all of their games up to that point. The game against Aitchison Rafferty came down to a tense final few seconds, with Dov Katzel hitting a belter into the roof of the net with just 30 seconds left on the clock

With a win needed from their last group game, Ali Kabani, the firm’s Marketing and Business Development Manager, scored a hat-trick, with the team coming back from 2-0 down after four minutes to win 6-5 against a team from HSBC to go through to the semi-final.

Unfortunately, the team had to forfeit the semi-final as some had to leave, so we’ll never know what could have been.

To find out more about Small Steps, please visit:www.smallsteps.org.uk