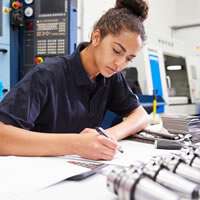 A new study has suggested that young women in the UK feel deterred from working in the property, building and construction industries, because they fear that gender discrimination would hold them back in their careers.

The research, carried out by the Royal Institution of Chartered Surveyors (RICS) in collaboration with YouGov, suggested that two in five women between the ages of 13 and 22 thought that they would experience gender discrimination if they pursued a career path in either of the three sectors. The same number agreed that they thought such discrimination would hold them back from advancing their careers.

Furthermore, almost a third of young women added they thought the property, building and construction industries were openly ‘sexist’ and male-dominated.

One in ten young men who were quizzed worryingly agreed, while one in five young women said that they would not consider working for a company unless it appeared to be ‘gender diverse’.

Sean Tompkins, RICS chief executive, said: “This country is suffering from a crippling skills shortage in these sectors. We need to encourage young people to enter the sector, and we need to show them that we are as diverse as the clients we work with.

“This survey reveals that the construction and property industries are still suffering from a reputational image crisis.

“We need to do more to encourage young women into these key sectors and smash the clear perception of a glass ceiling.

“Quite frankly, we need more radical action,” he added.