A Finchley-based solicitor has been named ‘Family Law Commentator of the Year’ at a prestigious ceremony.

Graeme Fraser, a Partner at OGR Stock Denton Solicitors, received the accolade at the Family Law Awards on Wednesday 28 November 2018.

The award follows a rigorous judging process, which saw Graeme shortlisted, followed by an online poll of family law professionals.

Graeme’s comments on family law issues featured across the national media over the past 12 months, including in The Times, The Guardian, The Evening Standard, The Huffington Post and Channel Five News.

Family law matters have been widely covered in the news this year. The Government recently committed to extending civil partnerships to opposite-sex couples following a landmark Supreme Court hearing and several prominent cases have raised questions about the UK’s divorce laws. 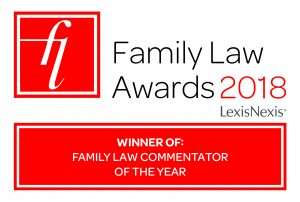 Graeme said: “I feel deeply honoured to have won the Family Law Commentator of the Year Award at the Family Law Awards. I would like to thank Sam King QC for nominating me and everyone who voted for me.”

“I am committed to raising awareness amongst the public of family law matters which affect the lives of millions of families up and down the country.

“In particular, many cohabitants can find themselves in perilous situations and at risk of destitution in the event of their relationships breaking down. The law needs to be updated to reflect 21st century society and I will be continuing to campaign on these issues.”

Graeme is Chair of the Cohabitation Committee of family law organisation, Resolution and is an active campaigner for the rights of cohabitants.