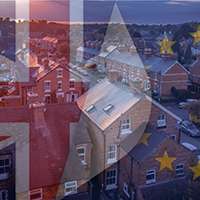 New figures from property website, Rightmove, have shown a marked rise sales agreed as the UK heads towards the 31 October Brexit deadline.

The month to 10 August saw 6.1 per cent more sales agreed than in the same period a year earlier.

Miles Shipside, a director at Rightmove, said: “Whilst approaching another Brexit deadline is now nothing new for prospective buyers, this one may seem more definite, and therefore one to beat, with the Government regarding this one as ‘do or die’.

“While the end of October Brexit outcome remains uncertain, more buyers are now going for the certainty of doing a deal, with some having perhaps hesitated earlier in the year.

“There’s only so long that buyers and sellers can delay the familial, financial and emotional forces driving the need to move, and with the average time between agreeing a sale and moving in being more than three months, we’re now entering the last chance saloon for those who want to have finished their move before the end of the year.

“We often see an autumn activity bounce, but perhaps this year’s political activities have brought that forward into a summer surge as buyers have gone bolder and earlier than usual.”