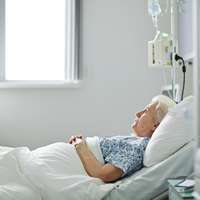 The family of an 87-year-old woman – who suffered brain damage after falling from a hospital bed – has launched legal proceedings against a London hospital.

Jean Malcherczyk had fallen to the floor of the ward at the Queen Elizabeth Hospital, in Greenwich, where she had been taken to receive treatment for minor injuries.

The incident caused her face to swell up and left the pensioner with cuts and bruises. A CT scan subsequently confirmed that she had also sustained brain damage.

Now Ms Malchercyzk’s family are launching a medical negligence claim, alleging that the hospital had failed to provide a safe environment. They also claim that it took six days to carry out the brain scan.

Daughter Karen said that the injuries sustained in the fall had left her mum “a stranger”.

“My mum spent six weeks in hospital before being released but she didn’t return to her normal self,” she said.

“Everything had changed, she started calling out ‘Karen’ day and night, in this loud voice. You couldn’t talk to her. She didn’t even know she was doing it, and she’d wander around.

“She had no idea if it was day or night, and I had to sleep in the next room to her downstairs, which meant I hardly had any sleep. She was also suffering seizures and was doubly incontinent which was awful. I knew she was never going to get better.”

Ms Malchercyzk was moved to a nursing home in December 2015, almost 12 months after suffering the incident at the hospital.

A spokesperson for Lewisham and Greenwich NHS Trust said: “As there are ongoing court proceedings, it would be inappropriate for the Trust to make any further comment at this time.”

It is important to seek expert legal advice if you believe you have the grounds to pursue a clinical negligence claim.  For guidance please contact our head of Dispute Resolution Stephen Silverman (ssilverman@ogrstockdenton.com) or visit our website.