Home » Where an employment contract is silent on when notice of termination by post is deemed to be given, when does the notice take effect? 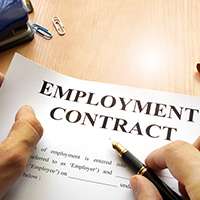 (a) when the letter would have been delivered in the ordinary course of post;

(b) when it was in fact delivered to that address; or

(c) when it comes to the attention of the employee and they have read it (or had a reasonable opportunity to do so)?

The Supreme Court held by a majority in Newcastle Upon Tyne NHS Foundation Trust v Haywood that the notice only takes effect when it comes to the attention of the employee and they have either read it or had a reasonable opportunity of doing so.

Facts: Ms Haywood was employed as an associate director of business development. She was told that she was at risk of redundancy in the months approaching her 50th birthday, which was on 20 July 2011. This was significant because if her employment terminated by reason of redundancy on or after her 50th birthday, she would be entitled to a considerably more generous early retirement pension.

Ms Haywood was contractually entitled to be given 12 weeks’ notice of termination but her contract was silent about how notice was deemed to be given.

On 19 April, Ms Haywood went on holiday. On 20 April, her employer sent her a letter to her home address by recorded delivery and ordinary post, purporting to terminate her employment with 12 weeks’ notice ending on 15 July 2011. Ms Haywood did not read the letter until 27 April when she returned from holiday.

Ms Haywood brought a successful claim in the High Court and successfully defended her employer’s appeal in the Court of Appeal. Her employer appealed to the Supreme Court.

Held: When dealing with written notice sent by post, and in the absence of an express contractual term specifying when a notice of termination is effective, the notice starts to run when the letter comes to the attention of the employee and they have either read it or had a reasonable opportunity of doing so.  Thus, the notice served on Ms Haywood was not deemed effective until 27 April and Ms Haywood was entitled to the higher pension.

Comment:  It is interesting that this issue caused a split decision in the Supreme Court but the majority’s decision now represents the settled position. However, if an employer is going to dismiss an employee, it is usually best practice to inform the employee in person (followed by written confirmation) as this will help avoid any doubt as to the date of dismissal. If an employer wants protection in a situation where it is not possible to communicate with the employee in person, provision should be made in the contract of employment that deems when notice takes effect.