Home » Is an employer obliged to postpone a disciplinary hearing pending the outcome of a police investigation into an employee? 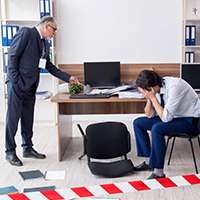 No, in almost all circumstances, held the Court of Appeal in North West Anglia NHS Foundation Trust v Gregg.

Where employees are suspected of having committed misconduct, such as theft, fraud, assault or substance abuse, complications can arise where there is a criminal investigation into the behaviour which is also the subject of an internal disciplinary investigation.  Most employers will not wish to wait for the outcome of criminal proceedings before conducting the disciplinary hearing, particularly if the employee has been suspended on full pay, as this will usually take several months.

FACTS:  Dr Gregg was employed as a consultant anaesthetist by North West Anglia NHS Foundation Trust (the Trust). In 2016 the Trust became concerned about the deaths of a number of patients under Dr Gregg’s care and launched an investigation while suspending him on full pay.  At the same time, the Trust notified the police and the General Medical Council. In May 2017, the Interim Orders Tribunal (part of the General Medical Council) imposed an interim suspension order on Dr Gregg and, in light of this, the Trust suspended his salary.

Dr Gregg’s lawyer advised him not to participate in a disciplinary hearing as he would risk prejudicing himself in the criminal investigation. The Trust refused to adjourn the hearing but then Dr Gregg successfully obtained an interim injunction in the High Court, preventing the Trust from continuing with its investigation until the police investigation was complete.  The High Court also found that the Trust was in breach of contract for not continuing to pay Dr Gregg his salary during the interim suspension.

The Trust appealed to the Court of Appeal.

HELD: The Court of Appeal overturned the High Court injunction, holding that employers do not have to postpone disciplinary proceedings to wait for the outcome of criminal investigations.  However, the Court upheld the High Court’s decision that Dr Gregg should have been paid his salary during his interim suspension.

The Court found that the Trust had not been entitled to withhold Dr Gregg’s pay during his period of interim suspension because:

The Court ruled that where the contract did not address the issue of pay deduction during suspension, the default position should be that an interim suspension should not attract the deduction of pay.  Exceptional circumstances, such as a complete or part admission of guilt, might justify such a deduction, but did not arise in this particular case.

With regard to pursuing an internal disciplinary process in parallel with an investigation by the police, the Court established the following principles:

In this case, the Court held that there was no evidence that the Trust’s actions in progressing the disciplinary process without waiting for the outcome of the police investigation would have had any effect on the criminal investigation or give rise to a real danger of a miscarriage of justice.

The Court also held that it would not have been wrong for the Trust, having started to investigate alleged misconduct, to ‘side-step’ the conduct disciplinary process by considering dismissal on the basis of Dr Gregg losing his registration to practice.  His contract allowed for alternative grounds for dismissal and starting one process did not prevent the Trust from relying on another.

Comment:  It is rare for an employee to obtain injunctive relief in the course of disciplinary proceedings.  Such cases are usually confined to the public sector where contractual disciplinary procedures and potentially career-ending allegations are more common.

However, this decision makes clear that an employer does not usually have to wait for the outcome of a criminal investigation before proceeding with an internal disciplinary process.  It should be noted that the standard of proof for the courts where a crime is alleged is ‘ beyond reasonable doubt’  whereas the question for the employer in carrying out a disciplinary procedure is whether it had a genuine belief, on reasonable grounds, that the employee conducted themselves in the manner alleged.

With regard to suspension this decision confirms that, without a contractual right to do so, it is unlikely that an employer will be able to stop an employee’s pay during a period of suspension and is consistent with the Acas Code of Practice on Disciplinary and Grievance Procedures which states that ‘suspension should not be considered a disciplinary action’.