Home » Is it discriminatory not to pay male employees enhanced shared parental pay of an amount equivalent to the enhanced maternity pay which an employer has made available to its female employees? 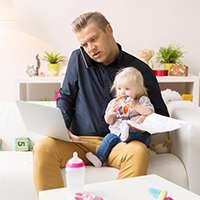 No, held the Court of Appeal in two recent separate cases – Ali v Capita Customer Management and Hextall v Chief Constable of Leicestershire Police. When the Shared Parental Leave Scheme was introduced in 2015 there was much debate about whether employers who paid enhanced maternity pay would be obliged to match those benefits for anyone taking shared parental leave (SPL). There is no statutory requirement for them to do so but the question decided in these two cases by the Court of Appeal was whether an employer who offered enhanced maternity pay would discriminate against its male employees if it failed similarly to enhance shared parental pay.

The Ali case centres round ‘direct sex discrimination’ which occurs where, because of sex, A treats B less favourably than A treats or would treat others.

The Hextall case centres round ‘indirect sex discrimination’ which is concerned with  policies or other rules and practices that appear neutral in that they apply to everyone regardless of sex but have the effect of disadvantaging employees of one sex unless the employer can show that they are justified.

Facts:   a) Mr Ali  – Mr Ali was entitled to two weeks’ paternity leave at full pay and then up to 26 weeks’ additional paternity leave, for which he would receive statutory shared parental pay (ShPP).  His female colleagues were entitled to enhanced maternity pay comprising 14 weeks’ full pay followed by 25 weeks’ statutory maternity pay.  An employment tribunal held that Mr Ali had been directly discriminated against on the grounds of his sex but when Mr Ali’s employer, Capita, appealed to the Employment Appeal Tribunal, it upheld Capita’s appeal. It held that there was no direct discrimination because the purpose of the Statutory Parental Leave Scheme is different from maternity leave in that the primary purpose of maternity leave is the health and wellbeing of the mother whereas parental leave focuses on the care of the child.  Accordingly, a father taking shared parental leave is not in a comparable situation to a mother taking maternity leave.

b) Mr Hextall – Mr Hextall took 14 weeks of shared parental leave and was paid ShPP.  His employer, Leicestershire Police, had a policy paying 18 weeks’ maternity leave at full pay.  An employment tribunal dismissed Mr Hextall’s claims of direct and indirect discrimination on the grounds of his sex.  Mr Hextall appealed the decision that he had not been indirectly discriminated against but his appeal was dismissed by the EAT. It was held (among other things) that the correct pool for comparison could only consist of employees on shared parental leave and any disadvantage to Mr Hextall would have been justified as a proportionate means of achieving the legitimate aim of the special treatment of mothers in connection with pregnancy or childbirth.

Both Mr Ali and Mr Hextall appealed to the Court of Appeal.

Held:   a) Mr Ali – The correct comparator in Mr Ali’s direct discrimination claim was a female on shared parental leave (not a female on statutory maternity leave).  That comparator would be paid the same as Mr Ali and therefore his direct discrimination claim failed. The Court explained that the predominant purpose of statutory maternity leave was for the safety and health of pregnant employees or employees, who had recently given birth or were breastfeeding unlike shared parental leave, the predominant purpose of which was childcare.

b) Mr Hextall – Mr Hextall was precluded from bringing an indirect sex discrimination claim because it was not the provision, criterion or practice (PCP) of paying only the statutory rate of pay for those taking a period of statutory parental leave that caused a particular disadvantage to men in his position compared with women.  Mr Hextall’s actual case was that men were disadvantaged not by the PCP but by the fact that only a birth mother was entitled to statutory and contractual maternity pay.  Since the correct pool of individuals for comparison purposes must contain persons whose circumstances are the same or not materially different from the claimant’s, women on maternity leave, who are materially different from men and women on shared parental leave, should be excluded from the pool.

Comment: These decisions of the Court of Appeal will be welcomed by employers with enhanced maternity pay policies.  However, the take up rate of shared parental leave by fathers has been very low since its introduction and the reason for this could well be because the rate of pay the father would receive would be much less than that received by the mother.  It should be noted that both Mr Ali and Mr Hextall are seeking permission to appeal to the Supreme Court.