Home » Concerns about minimum wage failings are on the increase 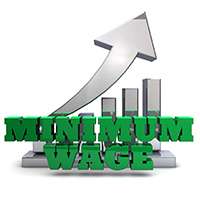 The number of complaints made about firms failing to abide by minimum wage legislation doubled last year, new figures suggest.

Recent increases in the statutory wage floor appear to have led to renewed concerns that some businesses are failing to meet their obligations.

In the last financial year, this led to a steep increase in the number of cases of individuals blowing the whistle on employers breaching the law.

While some businesses are accused of an especially cavalier attitude to minimum wage legislation, employment law experts suggest that the complexity of regulations can mean that many firms unwittingly miscalculate what staff are owed.

This can lead to embarrassing errors at some of the country’s best-known employers. In the past 12 months, Argos was fined £1.5million after it was revealed that the retailer had failed to factor in security checks when calculating pay.

Other typical pitfalls include paying standard workers ‘apprentice’ rates or deducting expenses – such as the cost of uniforms – from pay packets.

For expert advice on employment legislation, please contact the head of our Employment team Susan Bernstein or visit our website.