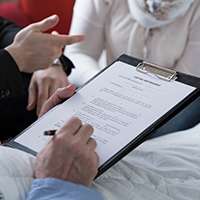 A High Court judge has ruled that two young children should be entitled to a lump sum maintenance payment from their late father’s estate, despite not having been named in his will.

Bianca Maria Corrado was awarded £386,000 from the £3.5 million estate of the Malkiat Singh Ubbi on behalf of her six-month-old and three-year-old children.

Ubbi was described by the judge as living a ‘double life’ and had been having a long-term relationship with Corrado, despite being married with two children.

However, when he died in 2015, the will he had prepared in 2010 made no provision for either of the two children from his relationship with Corrado.

The claim was brought by Corrado under the provisions of the Inheritance (Provision for Family and Dependants) Act 1975.

The claim that provision should be made from the estate for the two children was not disputed by Susan Ubbi, Mr Ubbi’s wife and beneficiary of his estate. However, the amount of the lump sum was disputed, with questions raised in particular relating to the housing needs of the two children, the need for childcare and whether provision should be made for a private education.

Complicating matters further, one of Mr Ubbi’s children from his marriage has a number of disabilities and, despite being aged over 18, is still dependent upon Mrs Ubbi.

An additional complicating factor was that Corrado had been living in a property owned jointly by Mr and Mrs Ubbi and would need to move.

Owing to the lack of precedent for claims from children so young, the court examined the financial circumstances of the parties in considerable detail, as well as examining the level of provision that Mr Ubbi had made during his lifetime for the two children from his marriage.

While the judge did not consider that provision for private schooling should be made, provision was made for the children’s housing needs and for childcare. The court specifically took into account that Corrado’s childcare needs would be increased as she would be looking after the children on her own.