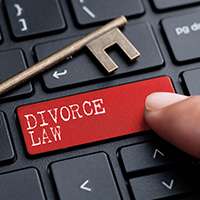 A Family Court Judge yesterday granted the Decree Nisi of Divorce to TV personality Ant McPartlin and his wife Lisa Armstrong.  This was widely reported as a quickie divorce.  However it is just the first stage.

The Court appearance reportedly lasted just 30 seconds.  It was probably less.  Neither party nor their lawyers will have attended and their names will simply have been read out by a Judge who was reading out a whole list of other people who obtained Decree Nisi that day.

The “I’m a Celebrity Host” confirmed that he and Miss Armstrong were separating in January and she sought a divorce on the grounds of his adultery. Under our current system if a couple have not been separated for more than two years then it is necessary to proceed either on the basis of the other persons adultery or unreasonable behaviour. A consensual divorce is not possible within two years of separation. This is why the government has finally given into pressure from Family Lawyers and others to consult on reforming divorce law so that it is not necessary for a couple to increase the heat of relationship breakdown by having to refer to blame.

How Does the Divorce Process Work

Currently one spouse will file a petition for divorce showing the grounds relied on. If his or her partner chooses not to defend (the normal situation) then the petition can proceed to the first stage of the actual divorce process, Decree Nisi quickly.  Quickly bearing in mind Court delays is usually 2-3 months. It is good practice among family lawyers to agree the basis of a divorce petition before it is filed, to ensure that it is not defended.

Sensible couples also sort out all matters concerning finances and the children either before the Petition is filed, or after it is filed but before the Decree Absolute, which is the final decree of divorce.  Decree Absolute can only be obtained 6 weeks and 1 day after Decree Nisi at the earliest.

Peter Martin, Head of the family team at OGR Stock Denton LLP, said: “It appears that from reports that Ant McPartlin and Lisa Armstrong are equally sharing their very substantial family assets.

“This means that the couple have behaved sensibly in trying to sort matters out without litigation.

“Acting sensibly is always to the benefit of children of the family and in the end is a huge saving of costs and emotional bitterness.  As a committed mediator I know that it is possible to divorce ‘well’ and in a way that leaves children least damaged. It is a shame more celebrities do not follow this lead.”